7 replies to this topic

This is a very simple modification of Manic Miner to provide a higher score compared to a standard version. In addition to this, a few small minor (miner?) changes were also made to improve the game a fraction. Care was taken in what changes were made to avoid an insane score value being obtainable.
The 'score changes' performed were as follows:

A Cheat Mode has been added, which is activated by the BASIC loader if the player presses '$' during loading. i.e. the 'SYMBOL SHIFT' and '4' keys simultaneously. The game then enters 'Mega Bonus' mode, allowing the player to accrue even higher scores than in the 'standard' Big Bonus Edition! (Each of the four 'score changes' listed in bullet points 1-4 above are scaled up by an extra factor of 10.)

The 'High Score/Score' row, which is printed at the bottom of the screen during play, is rearranged for the Mega Bonus Edition to allow for higher scores to be accommodated - it is now quite possible to reach a score of a million points!

Finally, a couple of visual glitches from the original game were fixed. More technical details can be found in the 'Readme' .txt file which accompanies the game.

I guess this means that it's time to say "Happy Birthday Andy!"

My highest score so far: 360,940 , have .rzx to prove. Likely another player could potentially get quite a bit more than this.

Should be noted that was not until I ran out of lives!

, it was when I'd completed the game and was returned to the Central Cavern: 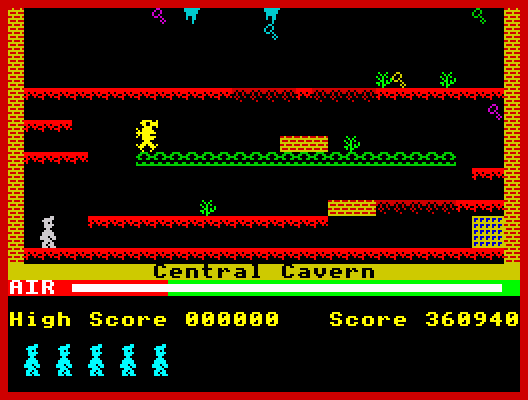 They have done a "short but sweet" entry for this release.

My highest score so far: 360,940 , have .rzx to prove. Likely another player could potentially get quite a bit more than this.

Congratulations on your score, Andy!

I have created a JSW Central page for Manic Miner - The Big Bonus Edition. It is here.

Since you have submitted your recording to the RZX Archive and there is already a video of it, I have embedded the video on the JSW Central page.

I have managed to beat your score by over 30 000 points (achieving 392,690 points at the entrance back to "Central Cavern"), and I am hosting the recording of this walkthrough on JSW Central. I am curious if it would actually be possible to go over 400,000 points, without losing any lives, of course...

and it was my second .rzx of it (my best attempt) as you may recall during the games development.

As an early Christmas present to the jswmm community, this project has been updated with the addition of a 'Mega Bonus' Cheat Mode (activated during the loading process by pressing $ whilst the BASIC loader is being executed).  This allows you to accrue even higher scores than in the 'Big Bonus' edition!

Who will be the first person to score a million points, I wonder?

Also tagged with one or more of these keywords: manic, miner, bonus, score, caverns